Solar Success in NYS: The Buffalo Public Schools Project is a Shining Example 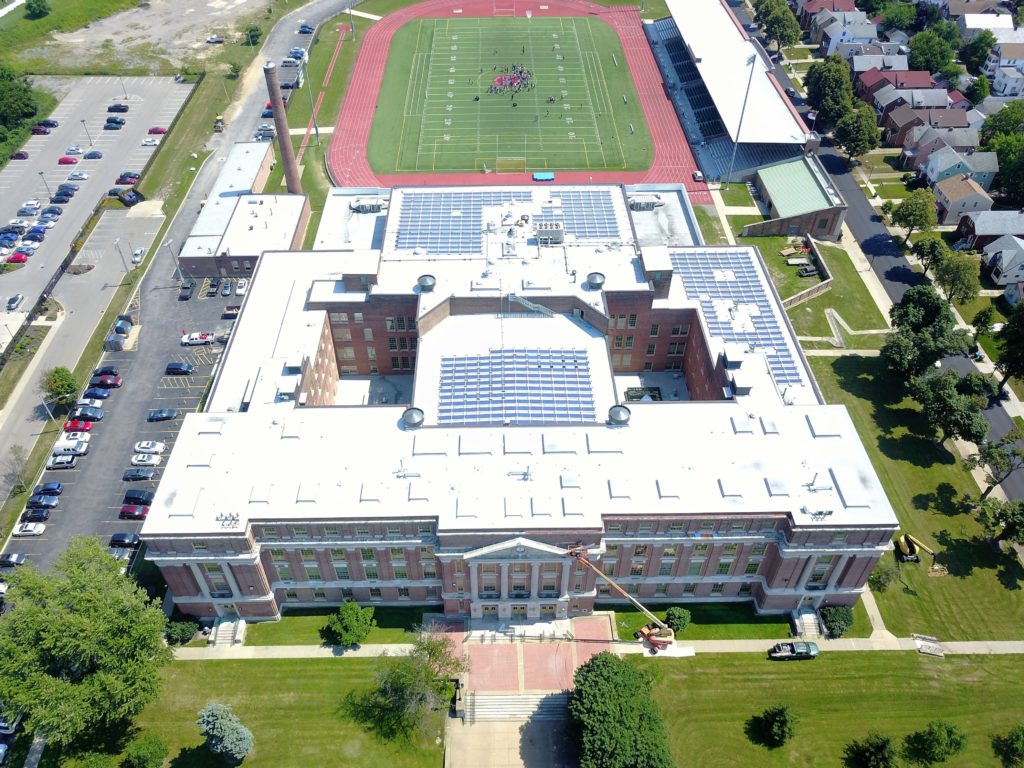 Solar power is getting to be big business in NYS. Governor Andrew M. Cuomo has announced that New York has made significant strides in the solar energy department, with an increase in more than 1,000 percent from December 2011 to December 2017. That increase translates to $2.8 billion+ in the NYS green economy, which is in stride with the governor’s 2030 renewable energy goals (NYS powered by 50% green energy).

Lieutenant Governor Kathy Hochul strategically made the announcement that the clean energy goals were being met, in front of McKinley High School in Buffalo – the Largest State-Supported Solar Project at a Public School System. Already, 19 solar installations are found at Buffalo Public High Schools, attributing to nearly 3 megawatts. The installations have an equivalent of removing 370 cars from the road.

“Solar is a vital part of this state’s clean energy future and we have experienced unprecedented growth in this new sector,” Governor Cuomo said. “We will continue to support the development of solar, helping to spur economic growth, creating new jobs and helping to build a cleaner, greener and more sustainable New York for all.”

“Governor Cuomo has committed New York to lead by example in our pursuit of fighting climate change and achieving bold clean energy goals, and this 1,000 percent solar growth milestone is a significant market of progress,” Lieutenant Governor Kathy Hochul said. “I commend the Buffalo Public School System for recognizing the importance of reducing its carbon footprint and for combining education with operation, installing the largest state-supported solar project in New York schools and providing students with the opportunity for hands-on learning in the industry. Investing in solar is part of New York’s strategy to boost renewable energy while creating jobs of the future.”

The recent significant growth of solar energy in NYS can be attributed to the New York State Energy Research and Development Authority through the $1 billion NY-Sun program, the New York Power Authority, and Long Island Power Authority. The boost in clean energy is enough to power 159,000 average homes.

Buffalo Public Schools Superintendent Kriner Cash, “This project, on the heels of our $1.4 billion reconstruction of schools, shows that the Buffalo Public Schools staff and Board of Education members are demonstrating that we are progressive stewards of our schools by implementing one of the largest solar panel projects in the state. I want to thank Lt. Governor Kathy Hochul, Assemblywoman Crystal Peoples-Stokes, the Sierra Club, and the New York State Department of Education for their support of this magnificent initiative. This project will provide a living laboratory for the students who are educated in our schools, reduce our carbon footprint, and help insure stable cost- effective power for years to come.”

Aaron Bartley, Executive Director, PUSH Buffalo said, “PUSH Buffalo’s Community Hiring Hall is an innovative workforce solution for local contractors and workers who have historically encountered barriers to employment in the Buffalo labor market. In partnering with PUSH, Montante Solar has decided to walk the high road and place local workers in family sustaining jobs on the frontlines of the emerging renewable energy economy.”

Overall, the move towards solar is being attributed to two main factors:

Richard L. Kauffman, Chairman of Energy and Finance for New York said, “A 1000 percent growth in solar shows how viable and affordable clean energy technologies have become in the State for consumers and public and private entities. Under Governor Cuomo and our nation-leading clean energy initiatives, New York is leading the way in combating climate change bringing in substantial investment from the private sector which has fueled impressive solar growth over the past six years.”

Alicia Barton, NYSERDA President and CEO, said, “Today’s remarkable milestone of 1000 percent solar growth demonstrates that, under Governor Cuomo’s leadership, New York is rapidly marching towards our commitment to meet 50 percent of our statewide electricity needs with renewable energy by 2030. Solar energy is increasingly the first choice for consumers who want to reduce carbon emissions while lowering their energy bills and these projects are creating thousands of good quality jobs all across our state- it’s a win for customers, communities, for the environment and our economy.”

According to Hochul, the increase in NYS solar energy has just begun. NY-Sun will be adding a total of three gigawatts of installed solar capacity in the State by 2023, which will not continue to position NYS as a leader in green energy, it will also bolster job creation with more than 12,000 workers engaged in solar jobs.

Dan Montante, President, Montante Solar, which is developing the Buffalo schools projects, said, “By utilizing solar power, the school district is reducing its greenhouse gas emissions and helping contribute to a cleaner environment. Just as important are the career opportunities that renewable energy provides for students in this emerging industrial sector.”

Senator Joseph Griffo, Chair, Senate Energy & Telecommunications Committee said, “Consumers paying for electricity are the ones who will benefit from generating energy from as many sources as possible. While our state has a diverse energy supply that come from sources such as solar, it is important that we make sure this supply is well maintained while we also seek ways to increase our renewable generation. But we must make sure that this is done at a reasonable cost to ratepayers.”

Assemblymember Michael Cusick, Chair, Assembly Committee on Energy, said, “This 1,000 percent growth in solar power in New York is truly a testament to the state’s commitment to ensuring a clean energy tomorrow for all. I thank the Governor and my partners in the state legislature for helping to achieve this goal and I look forward to moving New York forward as a leader in clean energy projects.”

Originally published by on Buffalo Rising on February 6, 2018